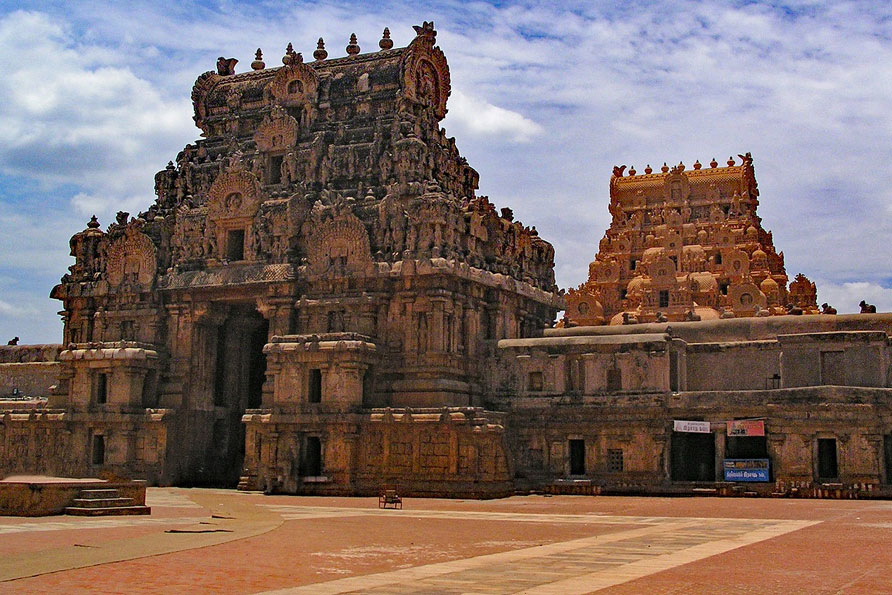 Brihadeeswarar Temple is a Hindu temple dedicated to Lord Shiva located in the banks of River Kaveri in Thanjavur, Tamil Nadu. This temple, also called Rajarajesvaram or Peruvudaiyar Kovil is one of the largest temples in South India. The height of Shivalinga in Thanjavur Temple is 8.7 m (29 ft) high, occupying two storeys of the sanctum.

Brihadeeswarar Temple Abhishekam will be performed daily for the Lord Siva. This beautiful temple is a good example of a fully realized Dravidian architecture and is a part of the UNESCO World Heritage Site known as the “Great Living Chola Temples“.

History of Brihadeeswarar Temple
King Raja Raja Chola I built this temple between 1003 and 1010 AD. The temple is designed in such a way that shadow of the tower never falls on the ground and because of the carvings, the shadows on the inclined walls are also not easily visible to the spectators at the ground level.

Amazing facts about Brihadeeswarar Temple
The temple has a massive corridor and one of the largest Shiva Lingas in India. This temple is a wonderful experience of Tamil architecture. The biggest mystery of all the other mysteries in Brihadeeswarar Shiv Temple is the huge cap stone in the top of the temple. The weight of the cap stone is astonishingly 80 tons. No man built shallow structure around the world has such huge stone cap at the top of the constructed temple.

There are lots of high-quality paintings in the Tanjore big temple that explain many things about the Kingdom of Chola Dynasty.

The temple is one of the most visited tourist attractions in Tamil Nadu.

Brihadeeswarar Temple Gopurams: There are three main gopurams to the shrine called the Keralantakan, Rajarajan & Tiruanukkam and all the three entrances are guarded by Dwarapalakas.

Brihadeeswarar Temple Painting: Thanjavur has a unique place in the history of Indian painting. There are two sets of Chola paintings that you can see and experience in the Tanjore Big Temple. First set of paintings are open for all and can be seen in the corridors that run along the wall of the temple.
Another set of paintings were discovered in 1931 by S.K. Govindaswami, a young history lecturer from Annamalai University. These paintings are on the walls of the secret passages of the temple that connects the temple with palace of Raja Raja Chola.

Things to do near Brihadeeswarar Temple – Make sure you cover other important places when you visit Thanjavur.

Gangaikonda Cholapuram – This beautiful temple was constructed in 1035 AD by Rajendra Chola I, the son of the famous Chola king Raja Raja Chola I, who built the Brihadeeswarar Temple at Thanjavur.

Vijayanagara Fort – Vijayanagara Fort is one of the popular historic monuments in Thanjavur. The fort, built in early 1550 AD, is located at a distance of 2 km towards the North East of Brihadeeswarar Temple or the Big temple.

MOST FAMOUS TEMPLES OF THRISSUR, KERALA