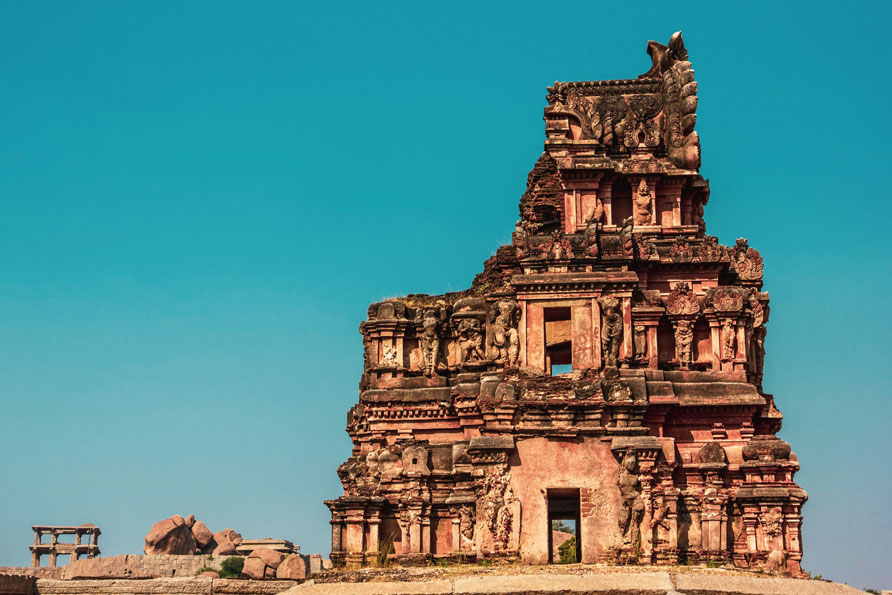 A village in Northern Karnataka, Hampi is heaven to travelers from all over the world. Hampi is recognized as a UNESCO World Heritage Site was the former capital of the Vijayanagara Empire.

The best time to visit Hampi is from October to February as the temperature is pleasant. Shopping is an essential part of most travel experiences. Things to buy in Hampi are Stone Artefacts, Lambani Crafts, Leather Crafts, Musical Instruments, Banana Fiber Crafts & Inexpensive Clothes.

Vijaya Vitthala Temple – This beautiful temple was built in the 15th century during the rule of Devaraya II. Vittala is also said to be an incarnation of Lord Vishnu. This temple is considered to be one of the largest and famous structures in Hampi. The temple is located in the North-Eastern part of Hampi, near the banks of the Tungabhadra River.

Hemakuta Hill Temple – The Hemakuta group of temples is a group of ancient temples located on the Hemakuta hill in Hampi. Hemakuta Hill is one of the finest places in Hampi to see the sunrise & sunset. Most of the temples are dedicated to Lord Shiva, which has mesmerizing structures that draw attention from visitors.

Sree Virupaksha Temple – The temple was built by Lakkan Dandesha, under the ruler Deva Raya II of the Vijayanagara Empire. Hampi, the capital of the Vijayanagara empire, located on the banks of Tungabhadra River. Virupaksha means eyes without the form; Virupa means No Form, and Aaksha means Eyes, it means eyes without the form.

On the iconic battle of Talikota, where the Sultanates defeated Vijayanagar and killed Aliya Rama Raya. They then robbed and demolished Hampi to the ruined state in which it lies to this day.

Matanga Hill – Matanga Hill is a well-known place in the town and is home to the famous Veerabhadra Temple and it is probably the highest point in Hampi.

Stone Chariot – Stone Chariot was built in the 16th century by the orders of King Krishnadevaraya of Vijayanagara Empire. The shrine is dedicated to Garuda who is the carrier of Lord Vishnu. This spectacular piece of architecture is among the three famous stone chariots in India, others being Konark (Odisha) and Mahabalipuram (Tamil Nadu). The carvings and absolute beauty of this structure make it a MUST-VIST attraction of Hampi.

Stepped Tank – Stepped Tank is one of the most beautiful discoveries so far. Archaeologists have been dated to fifteenth century AD. The Stepped Tank located within the Royal Enclosure in Hampi is known as Pushkarani. The enormous tank is an example of the rich architectural skills of the workers belonging to the Vijayanagara Era.


Hampi is an ancient village in the Indian state of Karnataka.