Most Beautiful Waterfalls in India

HERE IS THE LIST OF MOST BEAUTIFUL WATERFALLS IN INDIA

Incredible, spectacular, and magnificent, Dudhsagar Falls (literally Sea of Milk) is a four-tiered waterfall located on the Mandovi River in the Indian state of Goa. No matter how many times you go there, you can never get enough of these gigantic waterfalls.

Dudhsagar Falls is amongst India’s tallest waterfalls with a height of 310 m(1017 feet) and an average width of 30 meters.

It is located on the Belgaum–Vasco da Gama rail route, about 46 kilometers east of Madgaon and 80 kilometers south of Belagavi, and is 60 kilometers by road from Panaji. 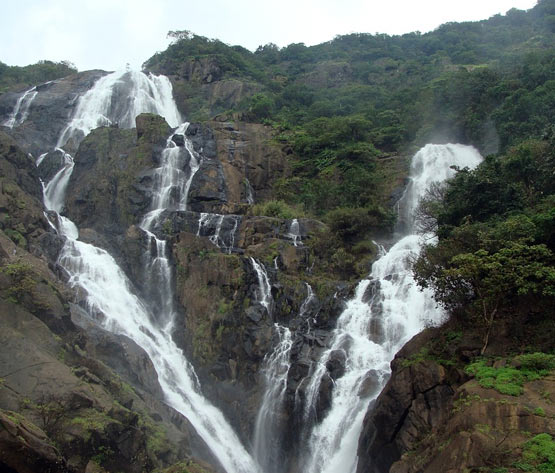 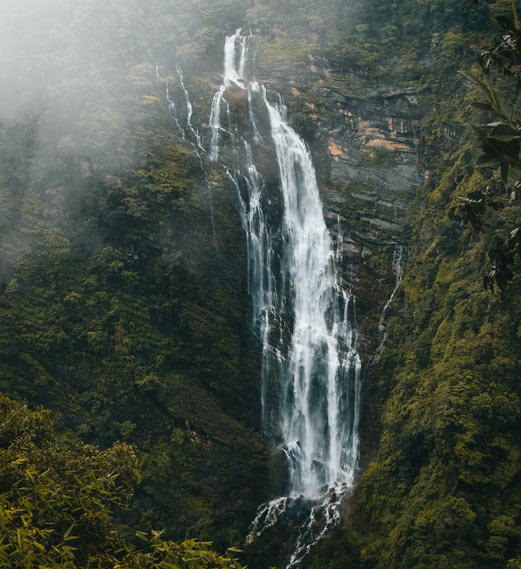 Jog Falls in Karnataka is one of the highest waterfalls in India. It is one of the most spectacular waterfalls in all of India as the massive Sharavathi River spilled some 253m in almost total freefall across its span. Monsoons are the best to visit this beauty.

Jog Falls is pleasant throughout the year and there is minimal variation in the temperature. However, the best time to visit Jog Falls is between the months of July to March.

Jog Falls is unique in that the water does not flow down the rocks in a tiered fashion; instead, it thunders down the slope, losing contact with the rocks, making it India’s tallest un-tiered waterfall. The waterfalls’ beauty is enhanced by the lush green surroundings, which serve as a scenic backdrop.

Athirapally Falls in Kerala is the largest falls in Kerala and is also known as the land of rivers & forests and great waterfalls. Athirapally waterfalls never dries out and can be visited anytime during the year. However, the waterfall appears in its full glory during monsoons, heavy rains cause inconvenience. So, the best time to visit is from September to January.

Athirappilly Falls is located on the Chalakudy River in Athirappilly Panchayat, Chalakudy Taluk, Thrissur District, Kerala. It originates from the upper reaches of the Western Ghats at the entrance to the Sholayar ranges. It is Kerala’s largest waterfall, standing 80 feet tall. 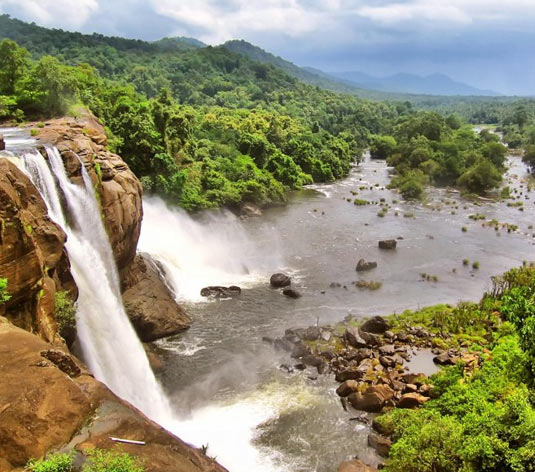 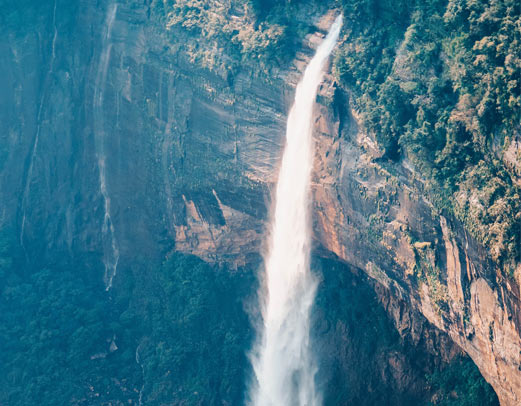 Nohkalikai Falls is India’s tallest plunge waterfall. It stands 340 meters tall. The waterfall is in the Indian state of Meghalaya, near Cherrapunji, which is one of the wettest places on the planet.

Monsoon season is the best time to visit Nohkalikai when the falls are in their full form. There are stairs taking the tourists to various other viewpoints.

Barachukki and Gaganachukki are two waterfalls in Karnataka’s Mandya district, near the island town of Shivanasamudra. 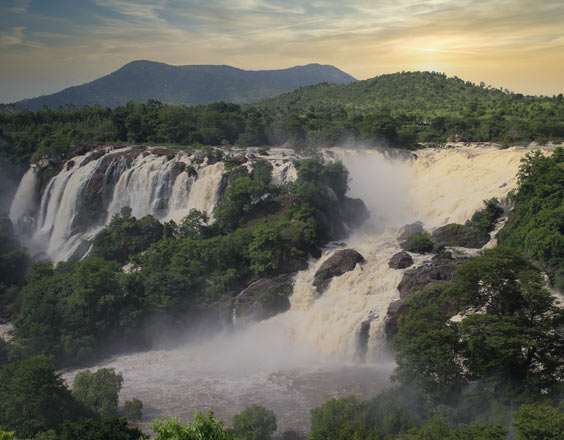 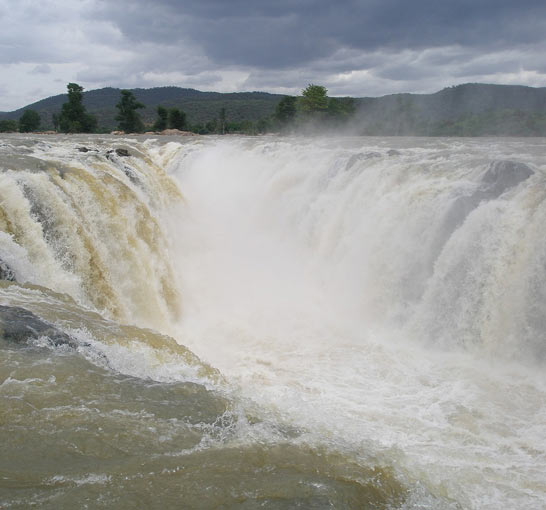 Hogenakkal Falls in Tamilnadu on the Kaveri river in the Dharmapuri district of the Indian state of Tamil Nadu. The best part about the Hogenakkal waterfalls is its Coracle rides.

The Kaveri River generates several waterfalls that run across the steep landscape near Hogenakkal. From August to May, immediately after the monsoon, is the best time to see Hogenakkal Falls.

Surrounded by hills of varying heights Hogenakkal provides guests with a unique atmosphere and rejuvenating relaxations. Oil massage by locals is a different experience. There are several transportation options accessible from Dharmapuri and Krishnagiri.

Chitrakoot Falls in Chhattisgarh located on the Indravati River is the widest fall in India. Because of its width and widespread during the monsoon season, it is often called the Niagara Falls of India. Monsoon is the best time to visit.

Chitrakote Falls is a natural waterfall on the Indravati River in the Bastar district of the Indian state of Chhattisgarh, which is 38 kilometers west of Jagdalpur. The height of the falls is about 29 meters.

A large water body that flows from this water fall catches tourists’ attention since it is located in the heart of dense forest and the Vindhya mountains. 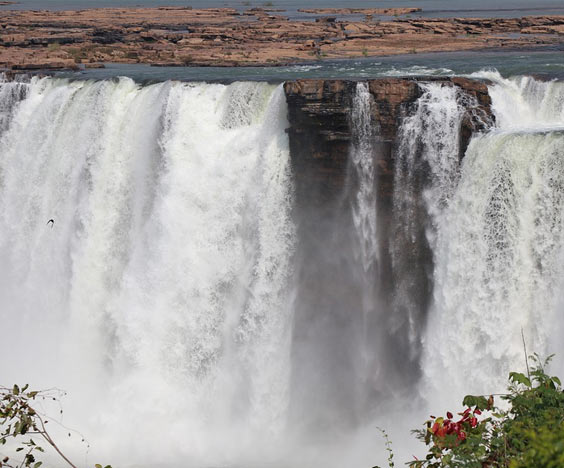 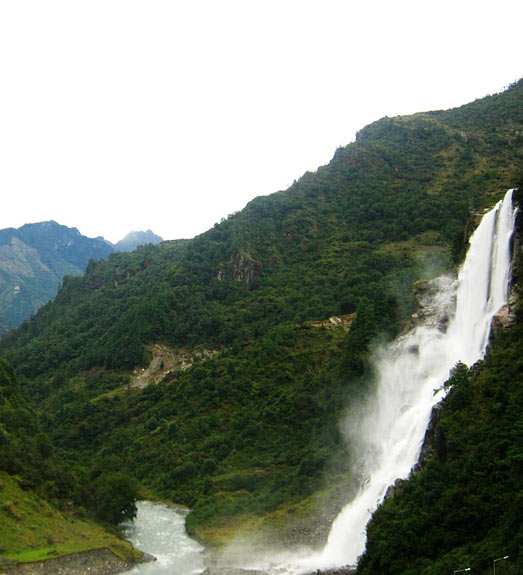 Nuranang Falls, the second of the seven sisters, Arunachal Pradesh has a beautiful hill station, Tawang which is one of the most visited. Nuranang falls close to Jung in Tawang district is an exceptional beauty to witness. It is one of the most spectacular waterfalls in this part of the country yet is unknown to many travelers.

It is located about 2 kilometers from Jang on the route linking Tawang and Bomdila, therefore it is also known as the Jang Falls. A modest hydroelectric plant near the base produces power for local usage.

Climate is chill throughout the year and the best time to visit is from February to November.

According to legends, the beautiful Bhimlat Falls was created by Bhima, the strongest of the Pandavas, to quench the thirst of their mother, Kunti, while on exile in the forest. The water falling from a height of 60 meters and making its way into the sea green lake on the foothills of fall.

Bhimlat falls may readily be described as an oasis in the desert. It is a fantastic weekend escape because it is located in Bundi, which is only 206 kilometers from Jaipur. Monsoon is the best time to visit Bhimlat falls. 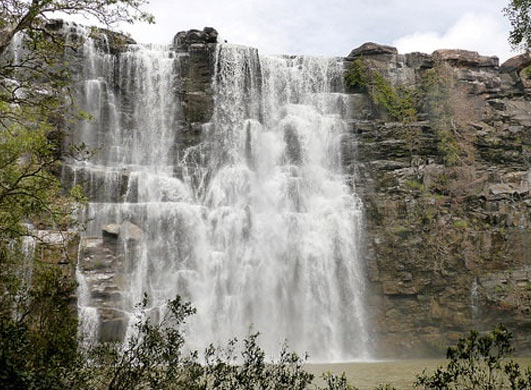 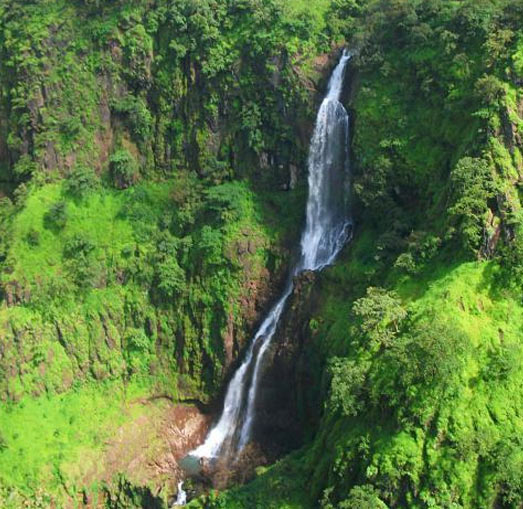 Thoseghar Waterfalls in Maharashtra is a scenic spot located near the small village of Thoseghar, 20 km from Satara city, at the edge of the Konkan region. There are a series of waterfalls, some of them 15 to 20 meters and one of approx. 200 meters in height.

People come from all over India to visit the area, especially during the rainy or monsoon season, July to November.

The Thoseghar waterfall is a beautiful location on the outskirts of the Konkan area. This is a seasonal waterfall that cascades into a steep canyon and is only visible during the rainy season. There is a picnic area as well as a freshly built platform with a nice view of the waterfall.

A group of waterfalls known as Barachukki is also known as Shivanasamudra or Bluff falls. The picturesque road is ideally suited for bicyclists especially during the Monsoon season, and it is 150 kilometers from Bangalore. The tremendous gusty wind that blows en route to the location will just blow you away. 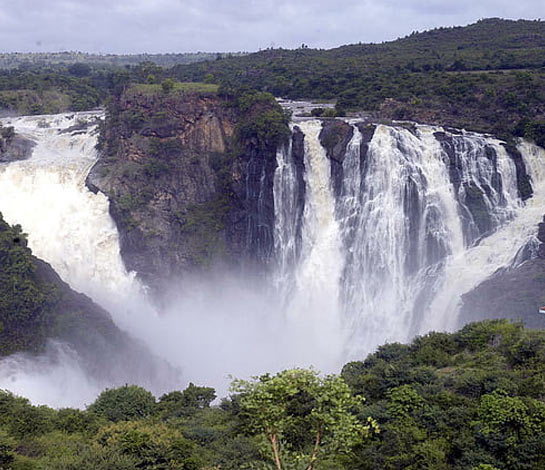 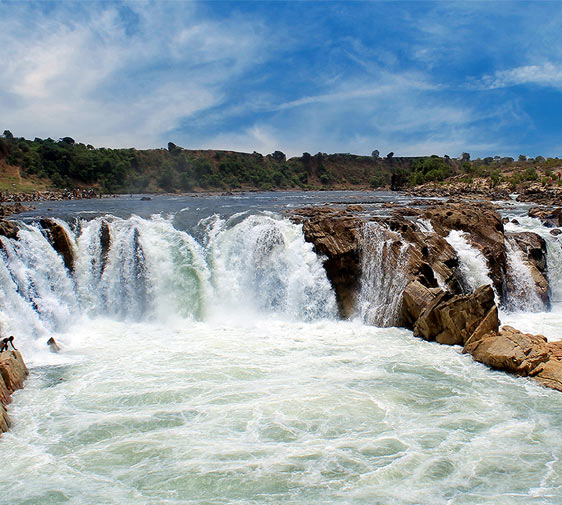 Dhuandhar Waterfalls in Madhya Pradesh is a waterfall in the Jabalpur district. The beautiful falls cascade down for 30 m and are also one of the most visited tourist attractions in Jabalpur. This waterfall originates from the Narmada river.

The Narmada River passes past the famed marble-like falls, narrows down, and plunges into a cascade with such intensity that it produces a bouncing mass of mist, resulting in the Dhuandhar falls. The plunges are so strong that the commotion can be heard from a long distance away.

The best time to visit Dhuandhar falls is during in Sharad Purnima, when Narmada Mahotsava get celebrated.

Iruppu Falls in Coorg is located in the Brahmagiri Range in the Kodagu district. This waterfall is also known as Lakshmana Tirtha Falls, which is a name derived from the tributary of the Cauvery River. The best time to visit the falls is during the monsoons when they are at their full capacity and hence become a breathtaking sight to witness.

It is a fresh water waterfall located 48 kilometres from Virajpet on the route to Nagarhole. The flowing watercourse of the Iruppu Falls is also an excellent trekking location. The cold water of the falls will relax and refresh you after a long walk as you sit and soak your feet in it, releasing you from the stresses of life. You can have the finest trekking experience ever at Iruppu Falls if you plan ahead of time. 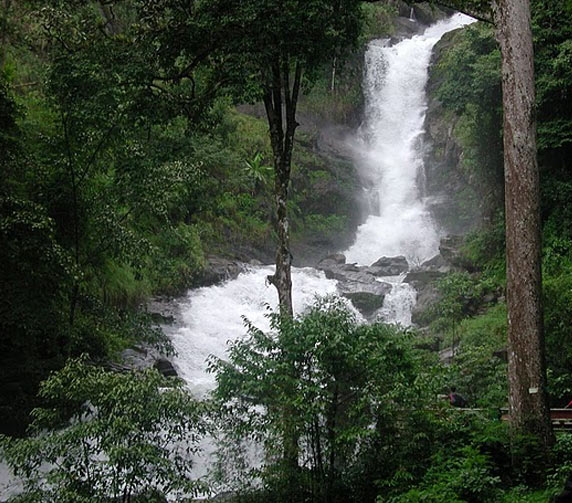 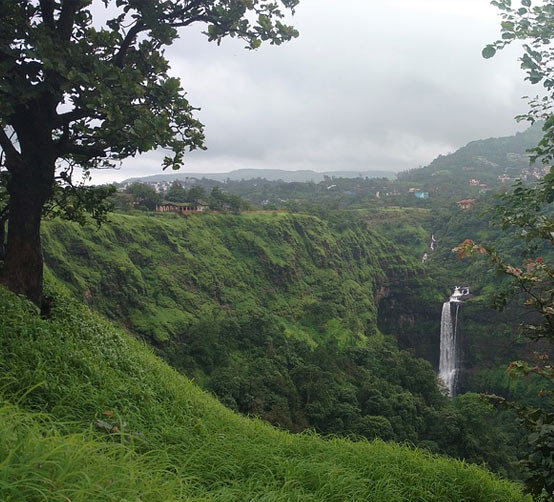 Kune Falls in Maharashtra located on the old Mumbai- Pune highway; right between Lonavala and Khandala. Dropping down from a height of 200 meters at a cohesive force. Kune Waterfalls is one of the most stunning waterfalls in the whole of Maharashtra, and the best time to visit is during mid-monsoon.

To get via Lonavala Bypass, use the Mumbai-Pune Expressway to Khandala and then to this waterfall.

It is around 65 kilometers from Wayanad. This beautiful waterfall is 200 meters high and has a sheer wall that is perfect for rock climbing. In addition, because the water pouring from the waterfall makes a big pool, one can swim and bathe in it. The water that falls from Soochipara eventually enters the Chulika River, also known as the Chaliyar River, after passing through hills in Kerala and Tamil Nadu. 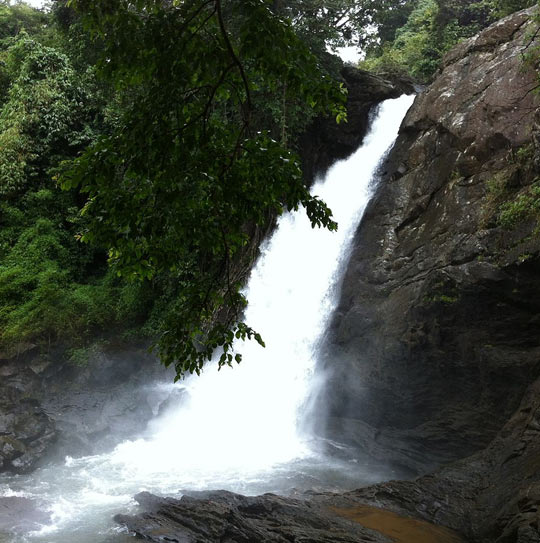